Good morning. Here’s your Daily Situational Awareness for Tuesday, 04 January 2022. You can receive this daily briefing by signing up at https://forwardobserver.com/daily-sa

REBELLION AND VIOLENCE: A recent poll conducted by the University of Maryland found that 1 in 3 Americans believe there are times when violence against the government is justified. This is the highest number recorded in twenty years for American’s that hold these views, with previous poll percentages in 2015 and 2010 at 23% and 16%, respectively. (Analyst Comment: Degraded trust in government and public institutions, and the inability of government to solve real problems, contributes to a growing willingness to use violence. With an increasing likelihood of violent unrest in the future, security considerations in many local areas will continue to increase in priority. Understanding the political and social groups operating within your local area will be important ahead of the elections later this year and in 2024. – D.F.)

U.S. COMMERCE DEPT SANCTIONS CHINA FOR “BRAIN CONTROL” EXPERIMENTS: The Commerce Department imposed sanctions on Chinese technology companies and announced last week that China’s military is engaged in dangerous work related to “brain control” research. Commerce sanctioned 11 Chinese institutions, as well as China’s Academy for Military Medical Sciences, who are involved in military research to disrupt or impair human neural activity through the use of external electronic devices. The objective of the research is to create “brain control” weaponry that can be employed in both gray zone and traditional armed conflicts. The research focused on the use of computer-generated neural signals deployed through RF transmitters to disrupt target functions and enhanced defenses from brain warfare weapons via programmable embedded microchips. (AC: China is demonstrating that it is not bound by conventional Western ethics when developing new cutting-edge weaponry for use in unrestricted warfare operations. This type of weapon will likely be used on China’s ethnic and religious minorities in the testing phase and then deployed against political targets abroad. – M.M.)

SCHUMER PLEADS WITH DEMS: In a “dear colleague” letter to Senate Democrats, Majority Leader Schumer (D-NY) called for unity on voting rights efforts, with the Capitol Hill protest as his reasoning. Sen. Schumer claims Republican state-led efforts to secure elections will “unwind the progress of our Union, restrict access to the ballot, silence the voices of millions of voters, and undermine free and fair elections.” He asks Democrats to unite behind ending the filibuster, claiming the Founders opposed legislation via supermajority. (AC: The increased sense of Far Left panic to accomplish “something” in Congress may have unintended consequences. The federalization of elections and changes to Senate rules with Jan 6th as the backdrop appears as desperate as it does politically divisive. Sen. Schumer is essentially abandoning all hope of bipartisan legislation, which could result in substantial control of our election system shifting to Washington D.C. – D.M.)

FINLAND SIDES WITH NATO AGAINST RUSSIA: During a New Year’s address, Finnish Prime Minister Marin and President Niinisto said the Nordic country may seek NATO membership at any time. The statements are in response to Russian foreign minister Lavrov threatening “serious military and political consequences that would require an adequate response from the Russian side.” Despite Finland’s close diplomatic and economic ties with Russia, support is growing in Helsinki given the military build-up near Ukraine. Russia continues to demand NATO cease expansion into its sphere of influence. (AC: Finland and Sweden have close bilateral ties with NATO members, and their inclusion in the military alliance would significantly strengthen NATO’s footprint. The Soviets attempted to invade Finland in 1939, but were rebuffed, which will become a strong propaganda component should tensions escalate. Following the collapse of the Soviet Union, Finland hasn’t reduced its military strength like other European countries. – D.M.) 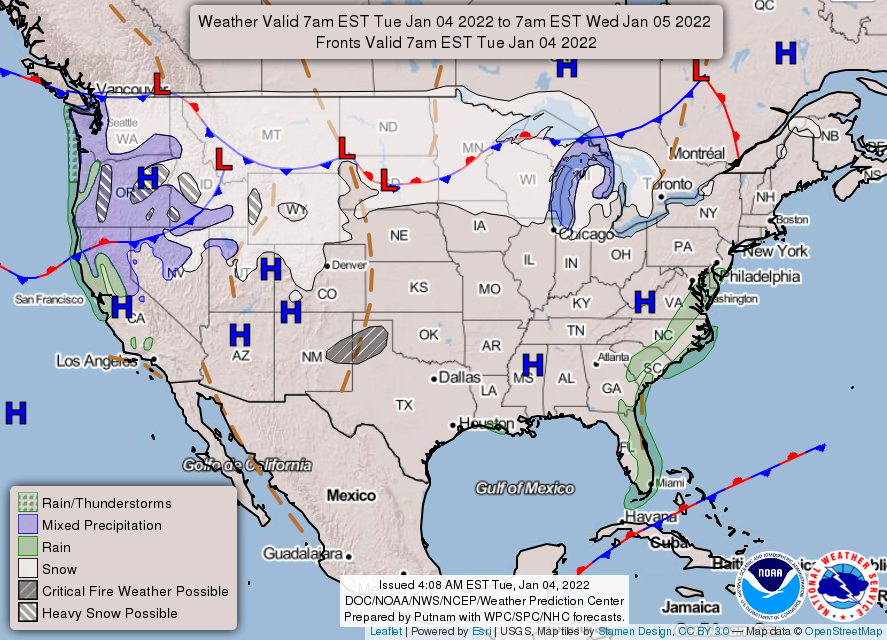