Good morning. Here’s your Daily Situational Awareness for Tuesday, 26 October 2021. You can receive this daily briefing by signing up at https://forwardobserver.com/daily-sa

BORDER: Another caravan of mostly Central Americans is heading toward the Texas border. The group is reportedly around 3,000 adults with around 250 children in tow. Dubbed the “mother caravan,” the group is currently crossing Mexico after busting through Mexican National Guard barriers. Texas Rangers and Department of Public Safety officers are aware and are adjusting their deployments to intercept the group. Caravan leader Irineo Mujica, a Mexican-American activist from Peoples Without Borders, has organized caravans for several years and constructed refugee centers across Mexico for transitory populations to refit and recover before attempting to enter the United States. (Analyst Comment: The migrants are getting updated information and “signing up” for the caravan via QR codes, indicating an increase in sophistication for the human smuggling operations. Financial support is generated by laundering money through non-profit and social activist organizations, hiding the true origin of their funding. These “dark money” operations are exploited by malign state actors to wage gray zone warfare against the U.S. in an increasing degree of frequency and intensity. – D.M.) 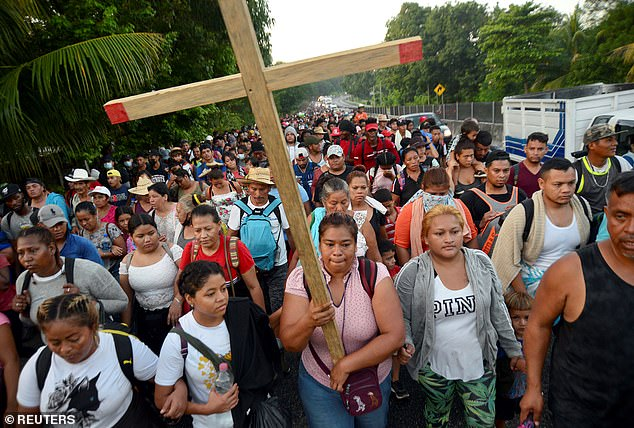 SOCIAL MEDIA: Executives from TikTok, Snapchat, and YouTube are testifying in front of a Senate Commerce panel today. The bipartisan group of lawmakers is expected to target the tech platforms’ influence and manipulation of information, especially for children. During a similar hearing in early October, Sen. Blumenthal (D-CT) said, “The damage to self-image and self-worth inflicted by Facebook will haunt a generation. Feelings of inadequacy, insecurity, rejection, and self-hatred will impact this generation for years to come.” (AC: The questioning of TikTok representatives should further illuminate Chinese influence efforts in the United States. The communist party retains control over TikTok through Bytedance and is using the platform to collect, shape, and influence the minds of a generation. – D.M.)

STRATCOM: U.S. Strategic Command’s (STRATCOM) Admiral Charles Richard is a top contender to replace retiring General Hyten as the vice chairman of the Joint Chiefs. His appointment could mark a substantial shift in the advice and recommendations made by the Joint Chiefs to executive officials and Congress. Under the leadership of Admiral Richard, STRATCOM became the most high profile U.S. entity to call out China’s nuclear advancements. “In my mind, [the Chinese] are building a military that is capable of coercion, which requires us to have a strategy to be able to stand up to that coercion or defend the Indo-Pacific and the broader world order that the U.S. and our allies value,” Admiral Richard said. (AC: Richard’s nomination must be formalized before the Senate can confirm his new position. Given the degraded relations with China, Admiral Richard’s transition from STRATCOM could provide the U.S. with the political will to engage the communists more directly. This is another indicator that the U.S. may move from competition to crisis or conflict with the Chinese, as Richard publicly stated the need to “address” growing threats from China. -D.M.)

GAS: The U.S. Energy Information Agency (EIA) forecasts natural gas costs will increase by 30% this winter for consumers, reaching a 15-year high. The average family heating their home with natural gas should expect to pay around $750 between October and March, with prices highest in the Midwest and Northeast. Natural gas stores are down 5%, and “a combination of flat U.S. natural gas production and record-high levels of liquefied natural gas (LNG) exports have resulted in below-average storage levels and upward pressure on prices.” (AC: The EIA noted heating costs for all fuel types are rising, an average of 10% across the nation. Expanded electric vehicle use, increased taxes on methane, and decreased production will raise prices further as energy blend agreements affect consumer pricing for months. Consider alternative heat sources as prices are expected to rise beyond 2022 due mostly to proposed regulation. – D.M.)

Energy prices across the nation will increase by an average of 30% this winter. Credit: EIA