Good morning. Here’s your Daily Situational Awareness for Wednesday, 10 November 2021. You can receive this daily briefing by signing up at https://forwardobserver.com/daily-sa

WAR: Lockheed Martin is expanding F-16 production in South Carolina. The company said it will “fill positions including airframe and powerplant mechanics, avionics technicians, engineers, supervisors, tool makers and quality inspectors, among other roles, in support of its F-16 program.” Lockheed wants to fill 300 positions by the end of 2022 to modernize the platform in use since 1974. (AC: The F-16 and its variants remain a popular U.S. export to allies around the world. The F-16 is the singular fighter platform for countries like Romania, who anticipate use against Russian forces in multiple roles. While the Chinese have ripped off designs for the aircraft, they currently lack the combined-joint battlefield command and control technology offered by U.S. systems. Expect increased exports of F-16s to prepare allies for a high-end conflict. – M.M.)

FOOD BANKS: Supply chain issues are impacting food banks’ ability to purchase bulk food packages. Tim Marks, President and CEO of Metropolitan Ministries Holiday Tent, says that the organization will not be able to purchase the required “20,000 turkeys and hams for families in need,” a group of families that have grown by more than 10,000 in the last year. The struggle is nationwide, with food banks requesting a significant increase in donations from those who can. (AC: Effects of the pandemic and rising prices in groceries are making it harder for families to purchase food for the holidays, and food banks are struggling to find the money too. The price of pork has increased 14.1% year over year for October, eggs 11.9%, and beef 20.1%. -T.W.)

ECONOMY: The latest Consumer Price Index rose to a 6.2% annualized rate of inflation, hitting the highest point since 1990. The Producer Price Index also rose to 8.6% year over year, showing increased costs for manufacturers and other producers. Ethanol prices have risen by 50% this year, explaining one reason why fuel costs have risen. Energy Secretary Jennifer Granholm hopes that gas prices won’t rise to a national average of $4/gallon, currently just under $3.50/gallon right now. The Biden administration is still looking at releasing fuel from strategic reserves to lower gas prices, although officials are now predicting that fuel prices will fall by early next year due to oversupply. Lastly, officials from the American Federation of Labor and Congress of Industrial Organization (AFL-CIO) are warning about union workers losing their jobs over vaccine mandates going into the holidays, calling the situation “both harmful to morale and substantively unjustified.” (AC: This could motivate the Biden Administration to reconsider the November 22nd deadline for federal employees to have the vaccine. – T.W.) 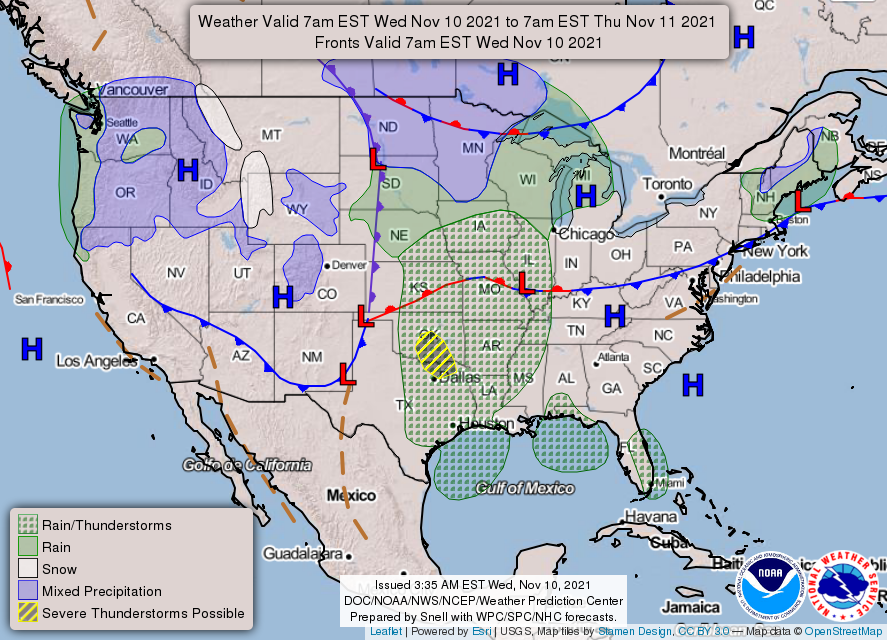